I’m delighted that Kerry Fisher has joined us at Romaniac HQ today and she’s brought along her dog too! Kerry has recently signed a fantastic book deal and she’s chatting about her road to publication. 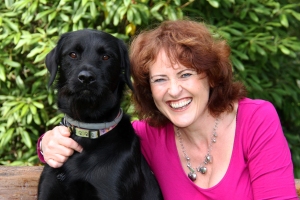 The Power of Persistence

When I was struggling to get published, I used to dread reading blogs like this in case other authors were saying ‘Three weeks after I wrote the first draft, an agent snapped me up on account of my witty interactions on Twitter and two weeks later, I had a book and film deal.’

I am not that person. My story should give hope to any writers who need a Lever Arch file for their rejections. I’ve written three novels. The first was rubbish, but the other two were a series of ‘hopes raised, hopes dashed, nearly but not quite’ from agents. I simply didn’t have the appetite to write a fourth without finding a home for them. Plus I’d made the classic mistake of telling everyone I was writing a novel and was having to jump into the coat cupboard at parties when I saw the words, ‘Have you been published yet?’ forming on people’s lips. My husband has been hugely supportive of my writing but although he never actually articulated ‘When is all this writing nonsense going to stop?’, he did encourage me to apply for a job as a shepherd with the National Trust. Time for a different approach.

So I self-published in December 2012. I did two things right: I paid to have a cover professionally designed. I printed business cards and leaflets.

I did hundreds of things wrong. Instead of paying for a professional proofread, I revised the novel myself until my eyeballs bled, but still managed to miss loads of typos. Gravest mistake of all: I stuck my novel out there with nary a thought for how I was going to make it stand out from the 400,000 already jostling for space on Amazon.

My learning wasn’t a curve. More of a climbing wall without footholds. In a nutshell:

The biggest tip of all: join the Romantic Novelists’ Association!

I went to the summer party in May, where I met Helen Bolton, commissioning editor for the Avon imprint of HarperCollins. We chatted briefly about one of her authors, Mhairi McFarlane, who writes funny women’s commercial fiction. I knew Helen was unlikely to read an unagented submission but it’s not every day you speak directly to an editor who works in the market you’re targeting. I sent off a long shot submission of the first five chapters. Within a week she came back to me and told me to send the rest, plus my next book.

I had an informal meeting with her at HarperCollins HQ. I allowed myself a small skip on the steps but still didn’t think anything would come of it. However, I was determined not to squander the opportunity completely. If I didn’t get a publisher, then maybe I could still find an agent before I got rejected. On the back of ‘Avon are currently considering the manuscript’, several agents asked for the full. Clare Wallace from Darley Anderson – whom I had also met at the RNA party – came back to me very promptly and asked to see me.

The meeting felt ‘right’ – professional, detailed, honest, warm, with a clear plan of next steps if Avon didn’t buy The Class Ceiling.

I left with an offer of representation. My immediate reaction was to accept straightaway because she was smart, switched on and I knew I could work with her. There hadn’t been any point in our meeting when I’d thought, ‘Hmm. Not sure about that,’ or worse, ‘You’re scary’. But I also knew that it was crucial to make the right decision, so I asked for some time to consider her offer without cartwheeling clouding my judgment.

Events overtook me. That evening, a two-book deal from Avon pinged into my inbox. I phoned Clare the next morning. Thankfully, my first instincts were right – she did a great job negotiating my contract and then sold the books for me at auction in Germany.

Five years of writing into a black hole, then an agent and a book deal on the same day. The ultimate proof that the whole mad writing business can turn on a sixpence.

The Class Ceiling is currently available on Amazon Kindle. It will be published as The School Gate Survival Guide by Avon in August 2014.

33 thoughts on “Struggling to get published? Great advice from Kerry Fisher.”