I’m sitting here staring up at the empty space where my ceiling used to be… A few weeks ago, it was just a ceiling – white painted, a light in the middle, it did the job it was meant to do. But then there was a leak that made a hole and then we decided to get the house re-wired. When the electrician turned up, he looked at the ceiling and said why not pull it down and get it done again properly, rather than patch it up and keep on making do. Cost-wise, there wasn’t much in it. Yes, there would be mess, yes there would be disruption and yes, it would take longer, but in the end it would be perfect. Finished, perfect and just how we want it. (Hold on – I am coming to a point with this.) 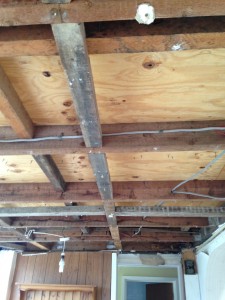 Sitting there, staring at the mess, it struck me that this is just like editing. My book was finished – first draft done, it was okay; it did the job it was meant to do. But there were plot-holes, a saggy middle, a bit of a tangle at the end… I looked at it again. I could patch it up, but I’ve decided to pull it apart and get it done properly. Yes, there’ll be mess and yes, there will be disruption and yes, it’ll take longer, but in the end I think it’ll be worth it.

So that’s where I am with my writing – the old edit is in bits in the back garden and I’m looking at the bare bones of it, getting ready to put the new ceiling up.

At the end of last month, I was thrilled to be awarded a bursary from Literature Wales for my work-in-progress The Murder House. The bursary is allowing me to take six weeks off from the day job to write, and this week is the first week of that bursary period, the rest of April and the whole of May stretches before me with nothing to do but write (well, between the hours of 9am and 3pm anyway – then it’s back to school runs and after school activities and real life.)

It means for the next six weeks, for six hours a day, five days a week, I’m being paid to write – I’m getting a taste of living the dream. Even with no ceiling and an awful lot of mess.

I’ve spent the last few weeks planning my time – setting myself targets to get the most out of the time. I want to have The Murder House finished and polished by the time I go back to work – and I’m also hoping to have the next book, which is currently just a few fragments floating about somewhere in my brain, plotted and planned and ready to go.

At the moment, writing is limited to evenings, the odd day off work and sneaky half hours snatched at the weekends. Being a full time writer is a long-held dream and I can’t tell you how much I’m looking forward to this little taste of it. I’m not going to waste a second of it, so if you see me on twitter, tell me off and send me back to my desk.

See you later – I’m off to live the dream.

10 thoughts on “Life Cycle of a Writer – Time to Write”