It’s officially the second month of summer and outside is a picture of puddles and pouring raindrops. It’s easy to feel unenthusiastic when the weather is like this, especially when deadlines are hovering over us like heavy grey clouds.

I’m conscious the deadline for submissions to the Romantic Novelist’s Association, New Writer Scheme is soon approaching so I have spent every spare minute surrounded by a pile of notes, red pens  and copious amounts of coffee, working on my WIP.

Working towards any goal is difficult. There will always be a time when the end result seems so far away it is impossible and it’s too easy for these thoughts to make you forget the reasons why you want to reach your goals.
For me, the poem below helps me whenever a little seed of doubt is planted in my mind and I begin to question my goals…..

When things go wrong, as they sometimes will,
When the road you are trudging seems all uphill,
When the funds are low and the debts are high,
And you want to smile but you have to sigh;
When care is pressing you down a bit,
Rest if you must but don’t you dare quit.

Life is queer with its twists and turns,
As every one of us sometimes learns,
And many a failure turns about,
When he might have won had he stuck it out;
Don’t give up though the pace seems slow-
You may succeed with another blow.

Success is failure turned inside out-
The silver tint of the clouds of doubt,
And you never can tell how close you are,
It may be near when it seems so far,
So stick to the fight when you’re hardest hit-
It’s when things seem worst that you must not quit.

I am currently hiding out in Cuba to stop and take a rest from the bustle that life brings. It´s been brilliant to just stop for a while with nothing on my to do list but to read, write and drink cocktails!

Keeping my Pina Coladas company for the next two weeks are three great reads. I´ve already finished (un) Like a Virgin by Lucy – Anne Holmes, which made me laugh like a lunatic throughout the ten hour flight to Cuba and I´m just about to finish Please Don´t Stop The Music by Jane Lovering which I am loving. It is one of those books that everyone told me to read and I´m not quite sure why I took so long. It´s a great read! The final book in my holiday read pile is Lizzy Harrison Loses Control by Pippa Wright. It has sat on my book shelf for far too long so I can´t wait to get stuck into reading it.

I´m loving Cuba: the hot weather, the sound of the waves crashing around me on a beach glittering with white sands. My only worry is running out of books to read…

I´ll be back towards the end of May with a true Writer’s Head on and will be focusing on getting my novel into the New Writers’ Scheme.

After a life time sacrificing her own happiness for others, Andi suddenly finds herself betrayed by those closest to her so she decides to put herself first for once and make drastic changes to find her own happiness in love.
Andi will do what it takes to find a man she can trust, even if that means changing who she is to fit the mould.  But Andi soon remembers that trusting someone often comes with heavy prices to pay.

This writing malarkey isn’t easy is it?

I’ve got so many ideas and so much passion to write them that I find myself wanting to jump from one story to another. For me, it’s a big challenge to stay focused and finish one project without turning into a literary butterfly.

For now, I’m managing to keep that butterfly at bay and channel all of my energy into writing my WIP.
Since I started writing the novel in January 2011, the characters have changed and the plot has developed. These changes are definitely for the better but it means I have more detail and sub plots that I need to keep track of and watch that they don’t fizzle out.

The advice I received from the Romantic Novelist’s Association, New Writer Scheme last year was excellent and I have definitely taken the advice given on board. At the moment I am running through my novel and polishing it up ready for my submission again this year.

I’d only been living in my new house for three weeks when I set fire to the neighbour’s garden.

My housemate and I had made a last minute, spontaneous decision to go out for a few drinks on Saturday evening. During the several hours it took to apply our make up just right and curl our hair to create enough volume, we decided to take a little break. And that’s where it all went wrong.

So there we were, stood with our hair in curlers and make up half applied, glasses of wine in hand and wearing what can only be described as an interesting ensemble of clothes. Sporting a dress over jeans whilst wearing one purple shoe and one red shoe, I had not got round to asking my friend which of the collection I should wear when she told me she had an idea and we ventured downstairs and into the garden.

The Chinese lanterns I had seen before had been floating beautifully and peacefully into the sky with a sense of calm, but then those lanterns hadn’t been touched by our powers of destruction. It also hadn’t been windy when I had seen them, which was the leading problem in our disaster.
It took some time to light the lantern with the breeze but eventually we got there. 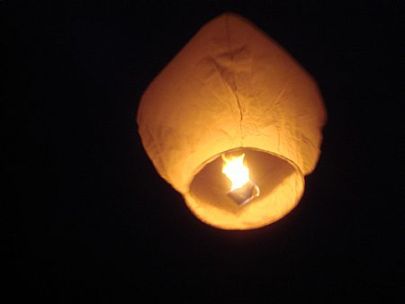 Following the normal tradition, we made a wish and after several attempts of letting go it eventually began to float into the air. Our eyes followed it upwards when suddenly a gust of wind appeared and carried it around the side of the house at high speed.
Both my friend and I looked at each other in horror before rushing out of the garden to follow the lantern.

Conscious of the flammable fire trap we had just released into the street, I didn’t stop to think about what I must have looked like. Instead, without sparing a thought on my curler crowded head and mismatching dress, jeans and shoes combo, I clambered after the lantern as the wind pushed it towards a car driving down the road. Bouncing off of the car it wrapped itself around a lamppost. The wine swished out of my glass as I reached to grab it, missing it as it slipped
back into the wind and went hurtling into a neighbour’s front garden.
The branches of a perfectly pruned plant pierced the lantern and poked into the flames. Within seconds the smell of burning spread across the street as the angry flames consumed the plant. There was nothing peaceful about this lantern.

Just as I was contemplating whether or not to attempt the ‘drop and roll’ technique to put out the flames, the door of the house opened.

How would I ever begin to explain this? Even with the most logical of explanations, my neighbour was never going to take my apology serious whilst I stood there like a piece of Velcro that had jumped in the wardrobe. All we were trying to do was set off a little peaceful lantern in the hope our wishes may come
true. Who was to know it would turn into arson?

Feeling a swish of panic fly through me, I looked up at the door with an apologetic expression and opened my mouth to begin my explanation, but my words wouldn’t come out. As I stared at the person standing there, it dawned on me. Perhaps my wish had just been granted…